Iot application in a drone inspection service for environmental control

During the experimentation, an experimental exploratory activity was carried out with an inspection service with drones for environmental control in the open field to validate the entire chain, from the alert to the drone mission, enriched by a Smart City platform to allow a decision maker to better manage the situation.

The aim of the service is to provide technical support to decision makers in environmental risk management. The proposed service uses the IoT for the interaction between a mobile application, a Smart City platform and an Unmanned Aircraft System (UAS).

The mobile application allows users to report risky situations, such as ignition of fires, spills of pollutants into the water or illegal dumping; the user only has to specify the class of the event, while the geographic coordinates are automatically taken from the GPS integrated in the device. The message sent by the mobile application arrives on a Smart City platform, which shows all the alerts received on a 3D satellite map, to support decision makers in choosing where a drone inspection is required. From the Smart City platform, the message is sent to the drone service operator; a CSV file that defines the drone's itinerary is automatically built and shown through the platform; the drone begins the mission by providing a video, which is used by decision makers to understand if the situation requires immediate action.

Smart City platform to collect and show all alerts in a 3D satellite map, and send the request for an inspection via drone;

System to manage inspections carried out by a drone, including the definition of a CSV file of the itinerary.

The typical use case begins when an end user of the mobile application observes a risk to the environment and reports it to a control room. This version of the application allows the reporting of the following environmental risks: 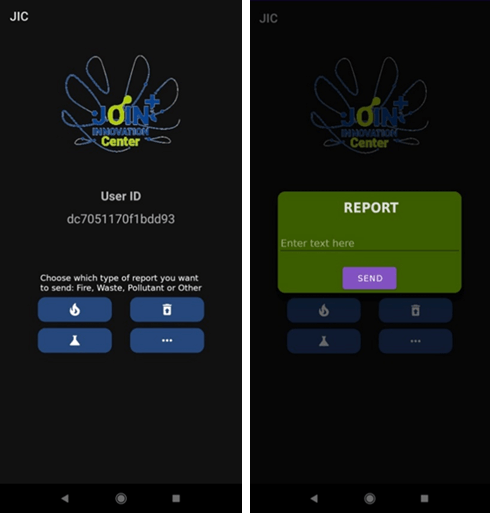 The Smart City platform used in the activity presented was developed by CRS4 in the context of the city of Cagliari to manage the acquisition, persistence, processing and presentation of data.

An ambitious infrastructure capable of connecting a vast territory and acquiring large amounts of data in many different contexts necessarily requires the use of a modular approach that addresses the individual aspects, from data management to the presentation of the processed information. To cope with the enormous amount of data arriving from the territory, the key points in the development of the platform are flexibility, stability and scalability. In this context, this platform covers a city but can easily be scaled over a larger area. These requirements are achieved by following the software opening and reusability strategies in order to avoid the technological lock-in, and thus extend its use to multiple contexts. The purpose of the platform is twofold: in the background it manages the data that can be conveyed to the platform; at the front-end it collects and presents to the coordinator all the information available for decision support.

In the specific scenario related to drones, the back end of the platform receives the flow of alerts sent via the mobile application, through a chain of rules implemented with the ThingsBoard open source IoT platform. The approach used was to manage information and communications as if they were data generated by IoT sensors and design the flow with a dedicated IoT platform to exploit its versatility and robustness.

The front-end of the platform is a powerful tool to support the decision maker in selecting alerts that require drone inspection. Let’s see the Smart City platform, with some alerts related to fire ignition and illegal unloading.

The field test activity covered the entire solution presented, from the alert to the end of the drone mission, managed through the Smart City platform. Unfortunately, a large no-fly zone, due to drone restrictions on military and urban areas, led to the choice of a rural location about 15 km from Cagliari. There, three people used a drone to simulate a base of operations, another person went nearby with a cell phone to send alerts, while one person from the office pretended to be the decision maker and selected one of the alerts to request. an inspection by drone.

It should be specified that in a real context the number of people required is lower than the number of people who were involved in the simulation in the field; in fact, only one person is enough to make the report, which should be an ordinary citizen willing to communicate a risk situation. To manage the smart city platform, the decision maker can lead the environmental inspection together with a flight planner and a pilot (but they can be the same person). It must be said that in some countries (such as Italy), due to the aforementioned safety problems, the drone operator has to drive the drone without losing sight of it, but drones are already technically capable of replacing humans in inspections. environmental. Here is a photo of the base of operations, taken by the drone. 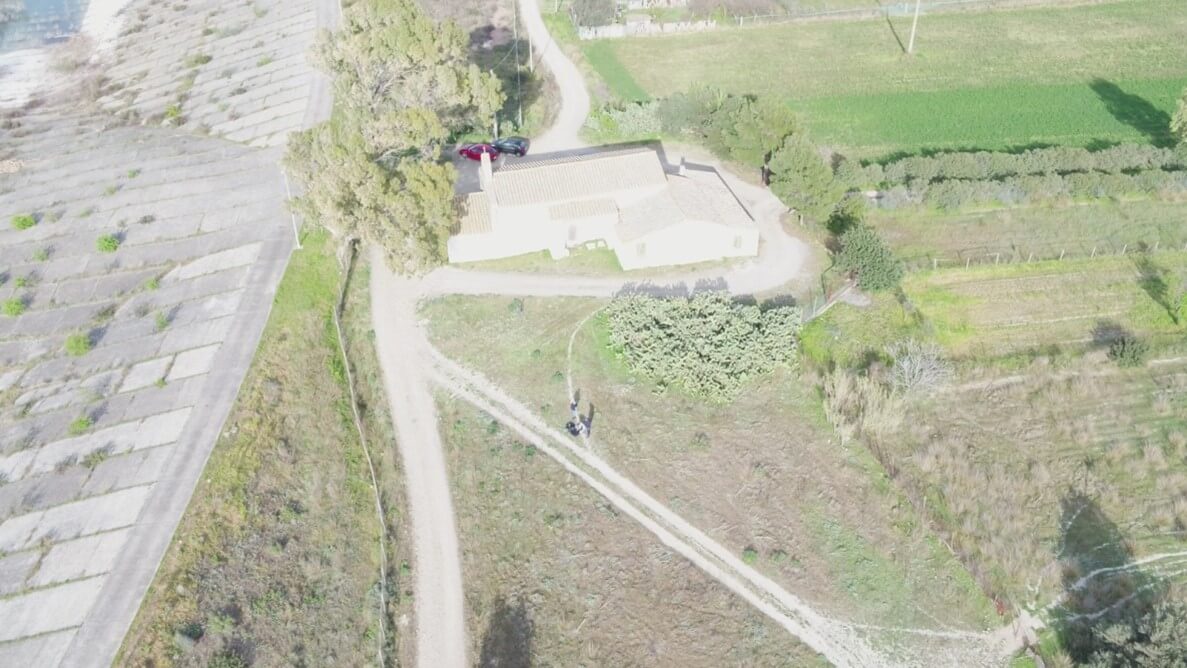 The experiment was completed in less than half an hour. A problem related to the accuracy of GPS coordinates, resulting from the cell phone not being connected to Wi-Fi, requires some more consideration.

The accuracy of the GPS system of smartphones depends on several factors. First of all, when a GPS is activated or if the GPS has been idle in the background for too long, the GPS must retrieve data from the satellites describing the position and timing of all the satellites in the system. This can take up to 4 minutes to correct, and during this time the GPS is not reliable (this is the so-called “cold start”). Typically, the Android subsystem uses several methods to deal with GPS inaccuracy; one of these is the Wi-Fi connection capable of providing a first georeferencing, which is then refined with satellite data; the absence of Wi-Fi slows down the “cold start” process.

Another factor is related to Android energy management and its customizations: the more aggressive it is, the more the sensor will tend to switch off to improve battery performance.

The mobile app presented in this project is POC and therefore subject to several improvements; to solve many of these problems it is possible to force the development of the application to force the app to be always active, and therefore with updated GPS coordinates. In the following image we find the drone during the mission in the open field.

The figure below instead shows two warnings and points for inspection. 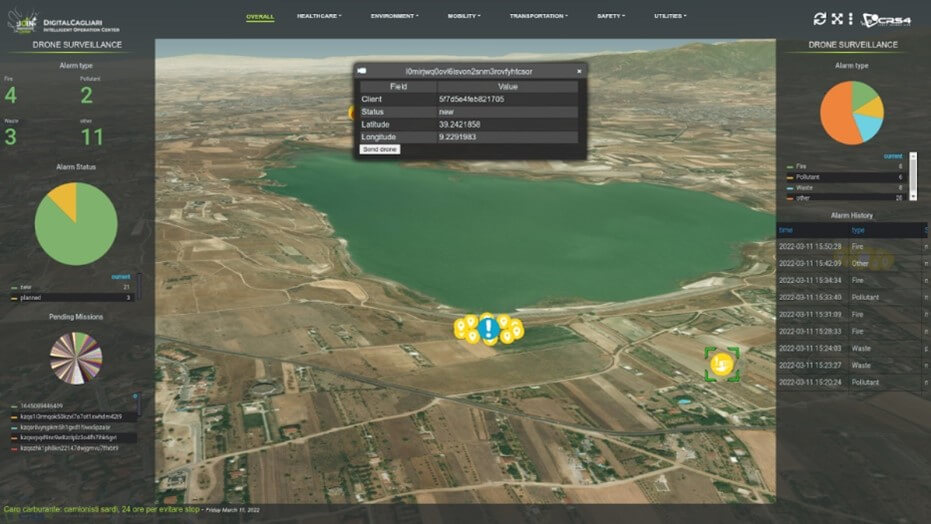 At present, the drone can share a streaming video of the area on YouTube via the mobile phone connected to the drone controller. Once the mission is finished, the video is also made available on the platform, as shown in the following figure. Based on the video, the decision maker can determine if a team inspection is needed and this closes the chain. 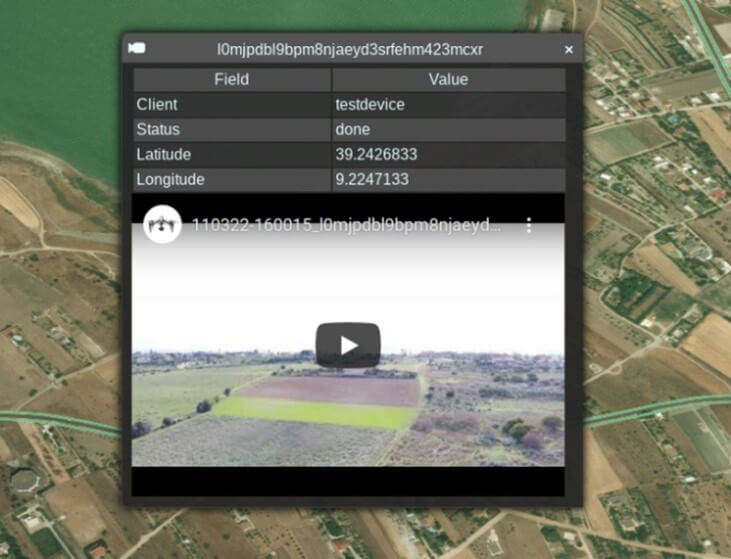 It can be said that there are two types of limitations common to any drone-based service: technical and regulatory. The technical limits can be overcome by an innovative evolution, while the regulatory ones can be circumvented with a special license issued by the authorities to operate in emergency situations. The field test was sufficient to better understand the advantages and disadvantages of the proposed solution, which are the challenges faced by any similar system and which are summarized below.

The main advantage of the solution presented is that in the operations center, the decision maker can manage many types of reports from all vertical applications implemented on the Smart City platform, not only those relating to the use case presented. In fact, the information generated by this specific application is just one of many, built on data collected from sensors and other sources, which together make up the control room of a Smart City, providing the decision maker with a holistic view of what is happening in the ‘area.

An important advantage of using a drone is that it is easy to fly at low and very low altitudes, compared to manned aircraft; for this reason, thanks to the on-board video camera, it was possible to obtain high resolution images and reproduce the video.

Another advantage is related to the ability for the drone to reach difficult-to-access sites, such as the nearby lake, if necessary.

The main disadvantage is related to the battery: the drone had to be recharged for a couple of hours before the mission, and its autonomy would not last more than 25 min (as already mentioned in Section 2.3); this also implies that the drone should be kept fully charged to always be ready for unexpected missions.

Another disadvantage is related to the Beyond Visual Line of Sight (BVLOS) restrictions, because in some real-world situations it would be useful to have the ability to steer the drone for an inspection in inaccessible areas.

The lack of connection is also a critical problem of the proposed solution, significantly limiting the operational territory, which is already reduced by other types of no-fly zones, such as urban areas, military zones, etc.